Honey Creek's You Are My Sunshine (aka, "Nellie") 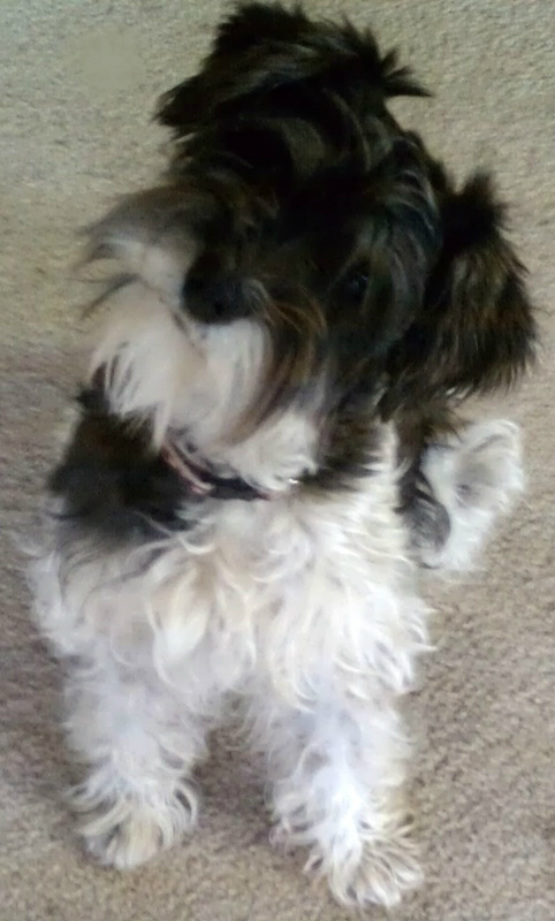 Our eight-year-old daughter has been watching me raise and train dogs for therapy work for a good part of her life.  She told me about a year ago that she would really like to have a little dog of her own that she could take into nursing homes and hospitals to visit people.  And so, as a Christmas present, along came...Nellie!
Nellie is our daughter's adorable Miniature Schnauzer puppy.  She has a beautiful sable and white parti- coat, and we are hoping to breed her with a Miniature Poodle (to be named later), to have parti- Miniature Schnoodles.  Nellie is very sweet, and easy to train.  She is a great kids' dog, and loves everyone, and having been raised with big dogs, has more of a big-dog, easy-going kind of attitude.  She should make an excellent therapy dog when the time comes!
Originally, our daughter named her puppy Noel, which we still call her sometimes.  However, we soon realized that, when training a puppy, it is not ideal for the first part of their name to be the word "No."  Therefore, we are now calling her Nellie most of the time. :o)
Nellie is from Tea Parti Miniature Schnauzers in Indianapolis, Indiana.